So anyway, my Mom died. It's now been long enough ago that we're at that stage where people I haven't seen all since June are casually asking "How was your summer?" and I really don't know what to lead with. Summer stank, thank you; shall we discuss the modern practice of grief?
I have also watched friends grieving their own losses in heartbreaking, beautiful ways throughout the summer - some here on Facebook, some in other ways. As the bustle of school year start-up settles into mundane busyness, I want to hold a meeting of some kind to develop a communication strategy, publish some kind of bulletin to head off intrusion and inanity, to divert casual acquaintances from asking about the summer, and to apologize to good friends who are not part of our daily routine and who are still behind on the news of the day: It's Saturday, and she's still gone.
When people who haven't been privy to my recent travel ask, I have trouble with what should be an easy question: Were my mother and I close? Well, there were 800 miles and many areas of disagreement that suggest otherwise, but our lives were woven together in enough ways that I feel her absence many times each day, most keenly at the time of day I'd normally call her to check in on her daily routine: meals and meds, neighborhood gossip, do we need to call a doctor, etc.
And then today. I haven't been writing, really at all, since her decline began early in the year. I've been trying to work the muscles with revision and reading, but we all know that's not the same thing. But I happened upon this scrap, obviously written in the middle of a trip, and which I only rediscovered because I'm cleaning out my email: I messaged it to myself, I guess because I was getting ready to board a plane, and forgot about it until today. Here it is, edited only for typos, once again challenging the definition of "close."
===============================================
Journal Entry: Atlanta International
I just had a hot dog. That may not seem remarkable, because it isn’t, yet as I remove the last of the spicy brown mustard from the corner of my mouth, it feels so out of character that it is reminiscent to me of both deja vu and an out of body experience.
Deja vu because of the stories of the hit dogs of my youth. Never a fussy eater, I would happily consume almost anything Mom put on the plate, or on the tray of the high chair. Without going too deep into fussy neighbors’ kids, toddler insomnia, and newlywed budgets, let me just say my folks discovered quickly that they could tear up a hot dog and toss it in front of me and I would gleefully and (usually)? quietly chow down - cooking it was optional. For much of my childhood, hot dogs were the go-to comfort food, and I preferred them to hamburgers until the day the nurse looked at me and said “have you taken your blood pressure meds today?” before I was yet on such medication. In the past 5 years, I may have had 10 hotdogs (and most of those in Chicago where the law so requires). So when I reached the top of the escalator in Concourse C and smelled the grilled goodness of tube steak nearby, I was surprised to find myself following my nose so intently.
The last thing I usually do before I post one of these little essays is to send it to my mother, so she might have a chance to read it before the FFB (Facebook Family Buzz) begins. Without that necessary checkbox, I feel stalled at an intersection with all the lights blinking yellow. But I know the engine will turn over, and I will drive through.
Posted by David Vincenti at 11:53 AM No comments:

This is a from a recent Twitter exchange. Most of the writers who responded loved the advice, responding that they didn't care what people think, adding thanks for the liberating thought, or commenting that their parents were already dead, so it didn't matter! I certainly do agree that it's great advice; if you're going to reach the limits of what you can create, you can't accept any barriers on the way.

But I do. With eyes open.

It's important to understand I don't say this with frustration or regret. I've advised many scientists and engineers through the years that you make decisions about the life you want to have and then optimize your career within that life. The most obvious example of this is where you want to live: if you're not willing to follow the jobs in your industry to wherever they are, you are accepting a limitation, and you need to be comfortable with that and work a little harder to make good decisions.

It's similar with writing. If you are going to cut off certain stories, avoid certain subjects, you need to work a little harder with the ones you have. Read a little deeper into others' work, find less-explored angles and markets, be more conscious of your craft and more specific in differentiating your own work. Does that sound less artistic? I see it rather the opposite: I like to thing I'm much more aware of what elements of craft comprise my style and my voice, and that I've had to lean into areas of content that are more important to me than to other writers. It's kind of like working with the thought-provoking constraints of a good writing prompt - but one that stretches over an entire career,

And the simple truth is this: No, I don't want my mother to read about certain things; at least not in my handwriting.
Posted by David Vincenti at 5:28 AM No comments:

What's your opinion on language evolving?

I used to be a purist, preferring to resist words acquiring new meanings, and even more firmly resisting the emergence of new meanings to replace perfectly good existing words.

Not sure what I mean? Well, how about "Biweekly," through decades of misuse, coming to mean both "every two weeks" and "twice a week?"

And what say you to the word "ask" as a hip new consultant-speak synonym for "request?"

While I admit I don't use these words in their new configurations if I'm being thoughtful, I think it's not only pointless to resists, it's counterproductive to go all grammar-nerd on my coworkers when they use words in a nonstandard way. There are two reasons

First, the art of creating new words is an old, respected discipline. Shakespeare made a habit of it, and lexicographers have been appropriating bits of other languages to define foodstuffs, and articles of clothing, and anything else for which Shakespeare failed to sculpt a term.

Second, and as a career technologist I should have internalized this decades ago, we keep inventing things for which there are no terms. For decades, advancements in technology have created a need for new words to describe new things. From radar and lasers to animatronics and nanobots, words keep emerging to meet the newness in our lives.

And what has this to do with poetry? Well, only that contemporary poetry shoudln't be afraid to leverage contemporary language. I've had folks comment on what I thought were pretty mundane words (phone? photon?) that they thought didn't belong in poems. I disagree. We should fill our poems with the language of our lives.

And if our lives involve cybersecurity, then we can talk about the malware our operating systems have to manage.
Posted by David Vincenti at 6:28 PM 2 comments:

The reference is Robert Frost. That is likely obvious to folks who have navigated here from the poetry lane of the roadmap of my life. But there are other paths "grassy and wanting wear" that may have led you here. Did we meet at a technical conference? An audition? Did we share a stand at the last American Accordionists Association Festival and Contest, or a row at the last middle school winter concert? Were you a student in my religious education class or my project management workshop? Perhaps you commented on my New York Mets jersey, or my penguin tie, or my college sweatshirt - and if this last was you, I have to say No, they were not this nice when I attended.

You may have joined me on this road before. The rusting shells of blogs past lie just at the edge of sight, overgrown with time and busyness. They are partially filled with ideas and intentions, and now serve best as places to pick up a quick though as we move along this new road. And where are we headed?

The topics here will be those about which I write poems, which means it could be mostly anything. Likely, we'll find ourselves deeper into subjects which Facebook and Twitter don't provide space for exploration. It's not likely to get loud, even less likely to get controversial, but very likely to bring in ideas from other disciplines: science, engineering, parenting, music, history, and any number of other things my overactive curiosity brings close to my poetry.

We will move the conversation forward approximately monthly, with shorter bits of flotsam available on social media in the interim. I hope not to let either of us down, and I look forward to the journey. Please; you come, too.
Posted by David Vincenti at 4:49 PM No comments: 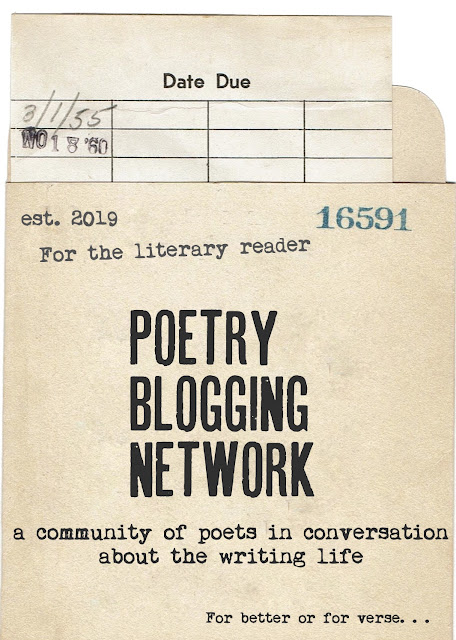